The beginning at the end of the world 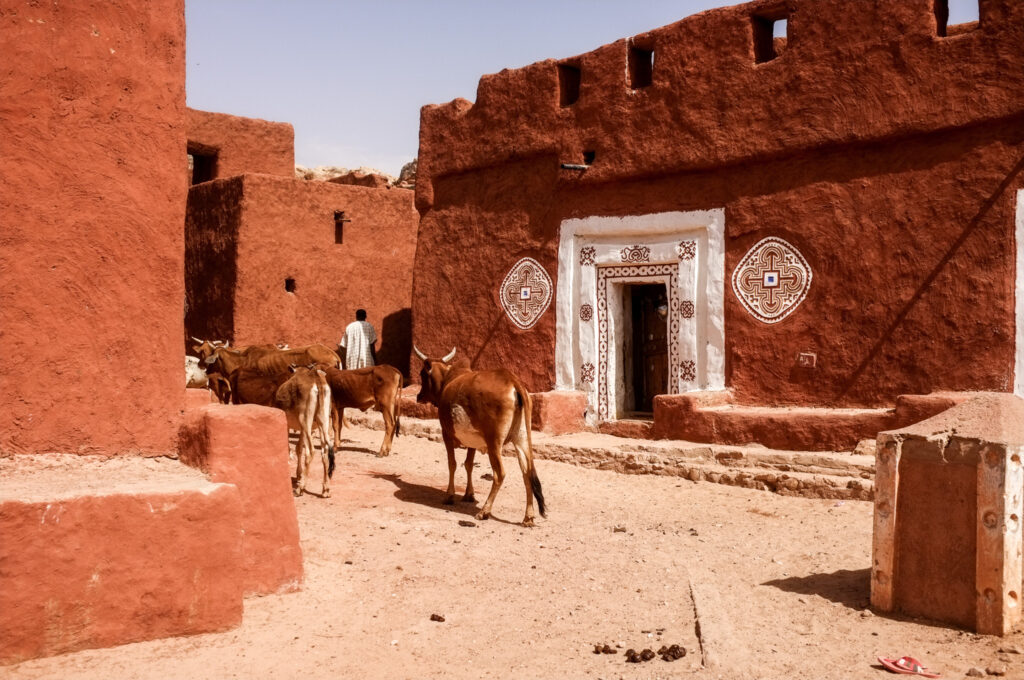 3 & 4 April 2014 ~ The orange, pink and yellow mud plaster in Oualata is often decorated with white geometric medallion patterns on the outside; the interior walls are often decorated in curly patterns. I’m not sure whether these patterns are of Berber, Arab, or Soninke heritage, but it gives the town an appearance unlike anything I’ve seen elsewhere in the Sahara or Sahel. Add in some cow herders walking their animals through town, lots of kids saying “bonjour monsieur!”, and smiling adults, and Oualata feels like a breath of fresh air after the tense atmosphere in Nema. 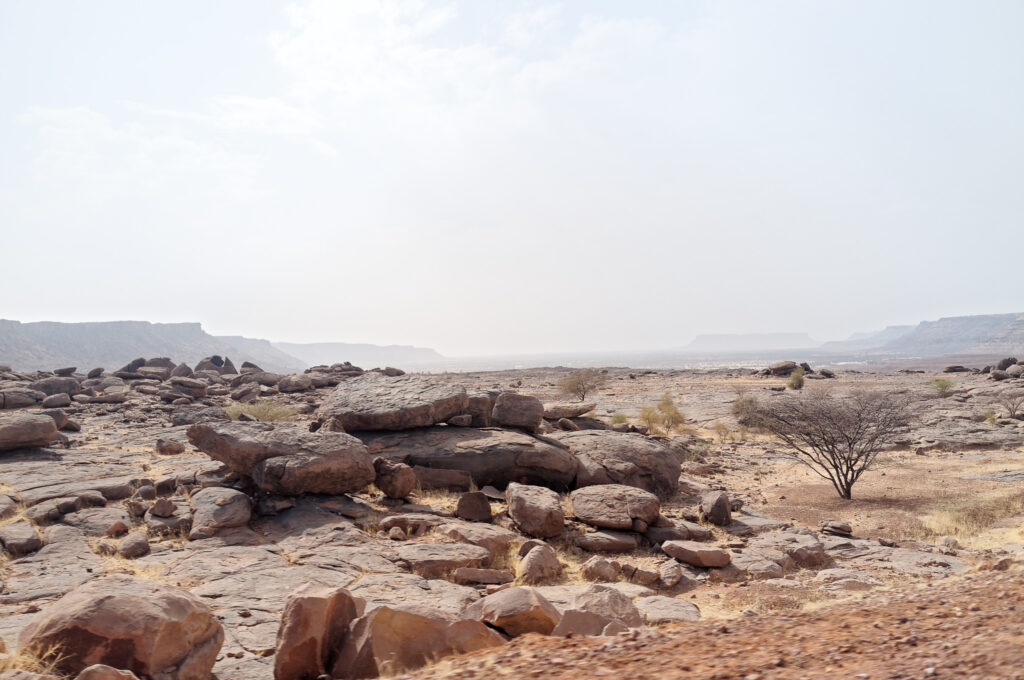 1 – 3 April 2014 ~ The pickup truck’s rear is filled up with fridges, food, furniture, construction materials, a few goats, and who knows what else, until the cargo is more than twice the size of the pickup truck itself… and then some ten people clamber on top of the cargo. I’m about to experience one of those quintessentially Saharan journeys, but I barely notice, let alone feel like taking a photo (I don’t want to do anything that makes it more obvious that I’m a tourist). 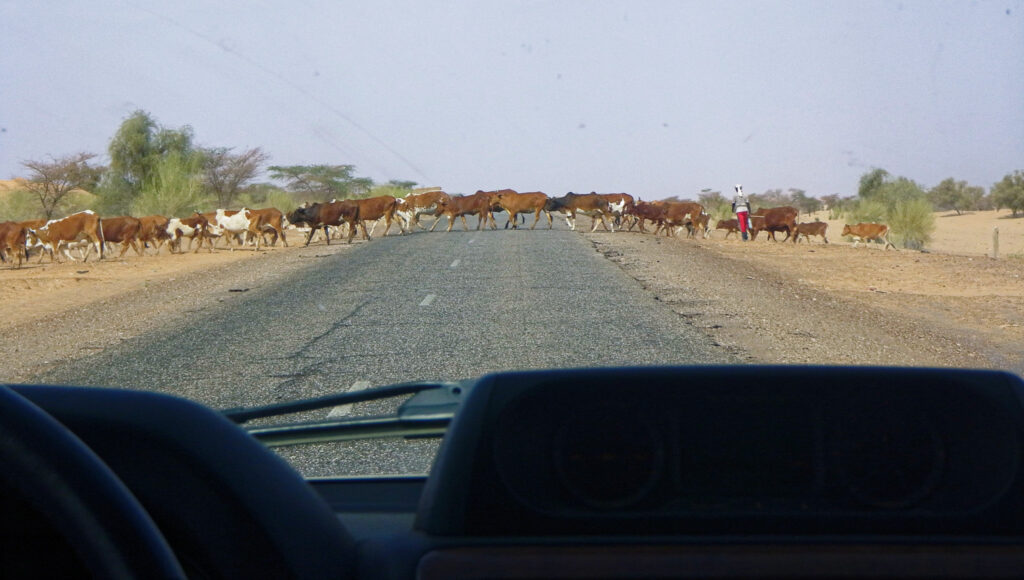 31 March & 1 April 2014 ~ There are many gueltas in the Sahara desert, and they’re often a lifesaver for nomadic herders. What makes this particular guelta special, though, is that it is one of the last places in the Sahara desert where the West African Crocodile still lives. 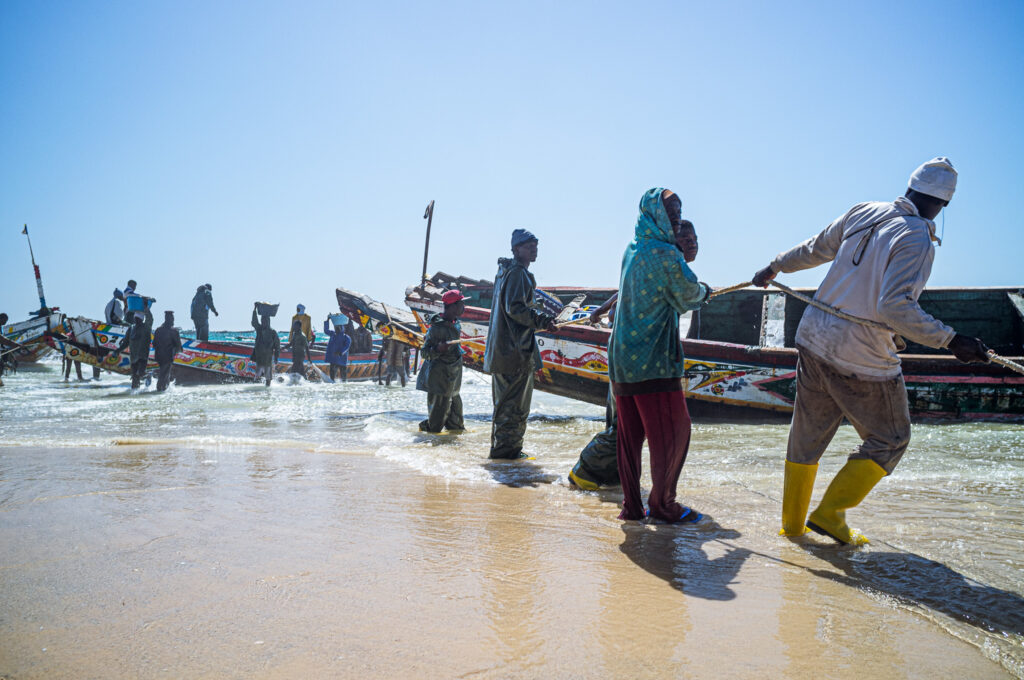 29 & 30 March 2014 ~ The sea is dotted with hundreds of pirogues, waiting to be brought ashore. The beach is littered with thousands of men, women and children, whose job is apparently to bring the fish from the boats to the traders. It’s a dramatic scene, and one that repeats itself every afternoon. 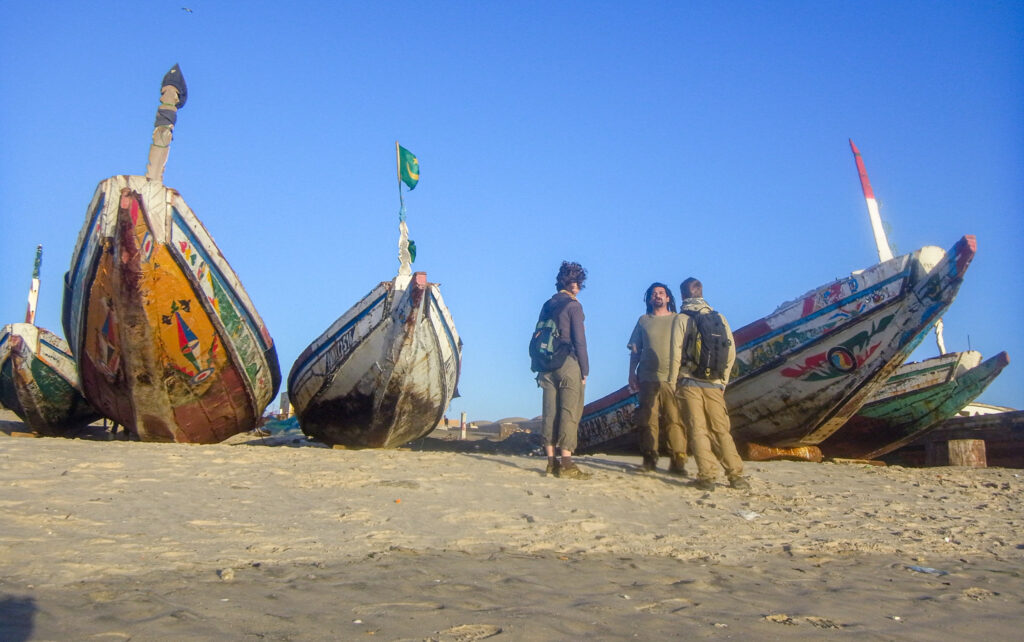 28 March 2014 ~ On the morning of my sisters’ birthday, I meet a couple from Bretagne, named Simon and Valerie. Their great passion is west-African music. Their main reason for coming to this part of the world is to interview and record West-African artists and others in the music industry. They are looking for an American, who supposedly lives in Nouakchott and records local artists. It sounds interesting, but it ends up leading to by far the craziest day of my life…

To the place of the winds 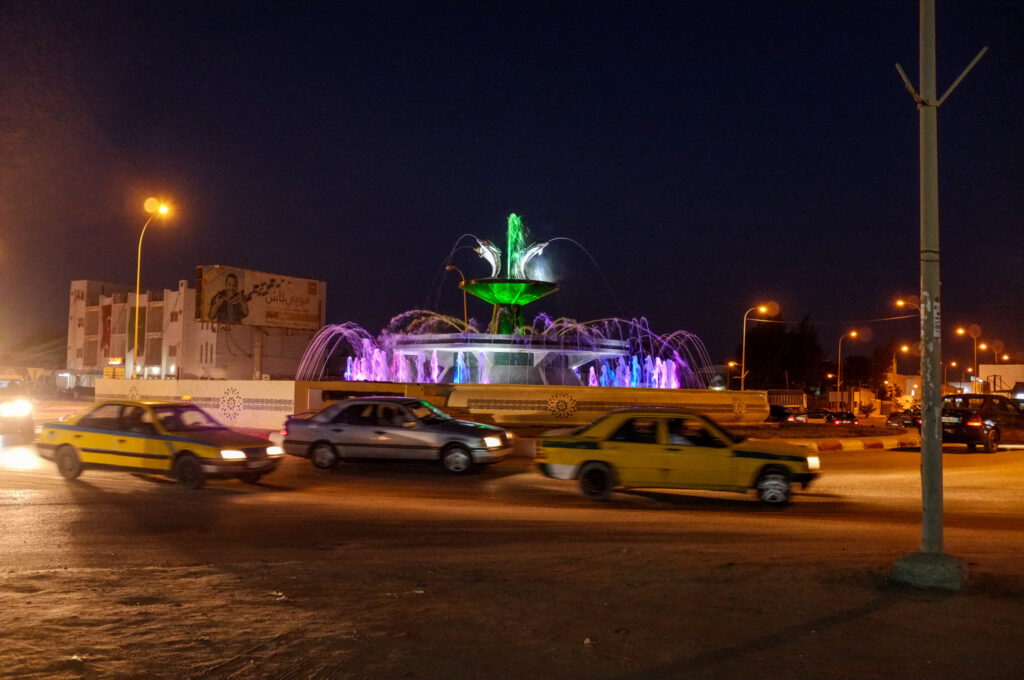 27 March 2014 ~ For the most part, this is a thoroughly uninspiring city; it was a fisherman’s village of only a few hundred people until the 1950’s, when Mauritania became independent. Since it had always tagged along as the most neglected colony within the colossal French West Africa, it had never needed a capital, or much of anything approaching a center of organisation. So when the country became independent, it needed a new capital, and fast. Someone, somewhere decided that the little fishing village of Nouakchott, or “windy place”, should become the capital.

A fairy tale with an anti-climax 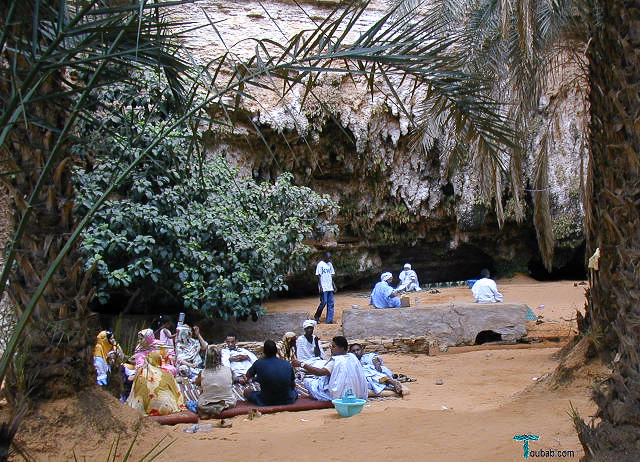 25 & 26 March 2014 ~ I’m curious about the dinner invitation by Coumba, the sister of the bride at yesterday’s wedding. Cora calls her for me, and as luck would have it, Coumba can make it tomorrow evening. The following day, Edgar and Katie invite Adrian and me to join them on a trip to an oasis, about 50 kilometers from Atar, called Terjit. Apparently it’s located in a ravine. Having already seen a stunning palm oasis in a ravine in Morocco (a Ait Mansour), I’m not terribly excited. As it turns out, my scepticism was completely unjustified; Terjit oasis is one of the most stunning places I’ve ever seen. 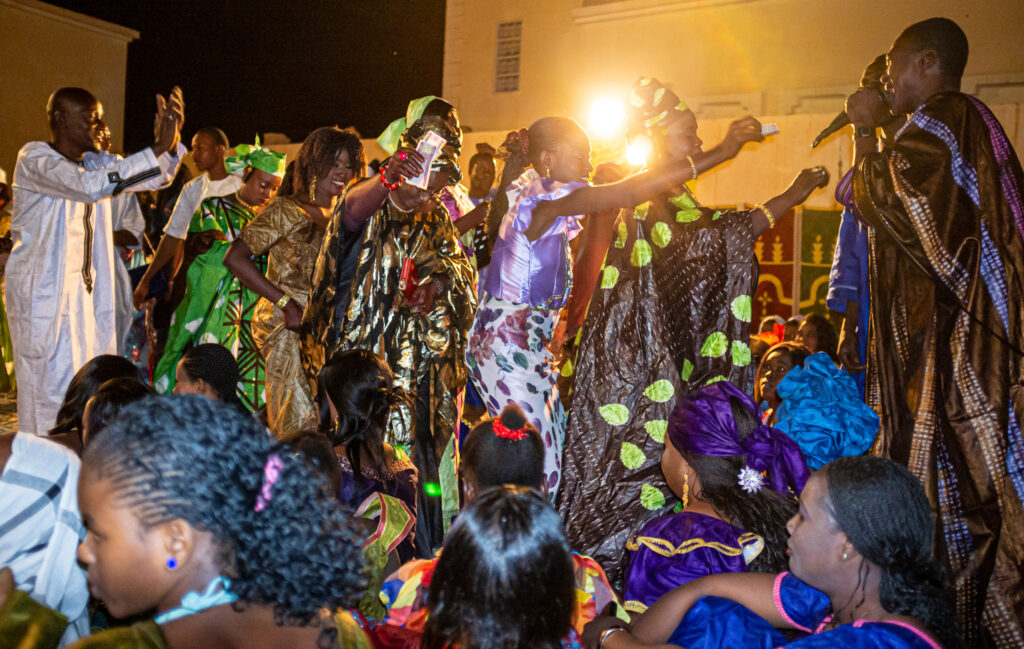 24 March 2014 ~ Together we carry the table with the cakes onto the hotel courtyard / parking lot that serves as the wedding reception’s venue. A man with a video camera and a painfully bright construction lamp, whose job is to document every last detail of the wedding, follows and records our every move. This, of course, does nothing to reduce the pressure of carrying a table full of cakes under the watchful eyes of all the guests – about 300 in total, or six times the number that Cora counted on when making the cakes! The upshot is that Justus, the cook and I are instantly guests of honour. This means that whenever I’m looking for a seat, someone else gets told to make place for me, and whenever I try to take a picture, a spot with a good view of the action is cleared for me; no matter who might have been sitting or photographing in that place! Given that I’ve only known the bride for a week, I feel quite awkward about my newfound status, and I try not to abuse it.

Of women, bandits and a fake tan 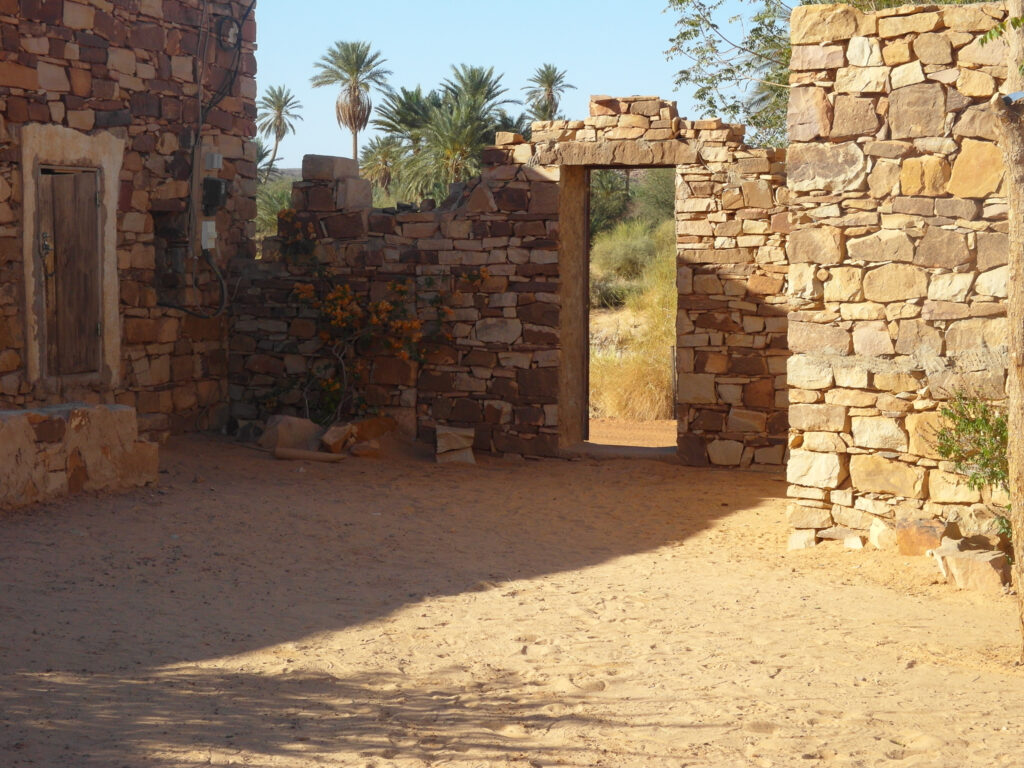 23 & 24 March 2014 ~ Chez Zaida is run, ofcourse, by Zaida. She’s a veritable powerhouse of a woman; black, fairly muscular, dressed somewhat in between Western and traditional styles, and giving her almost all-male staff orders in a calm but extremely authoritative way; there’s no doubting who’s boss here. Not that Mauritanian women are generally the stereotypical meek lambs; despite, or perhaps because of, the Arab culture and Islam placing much of the power with men, many women here have a whole lot of attitude. 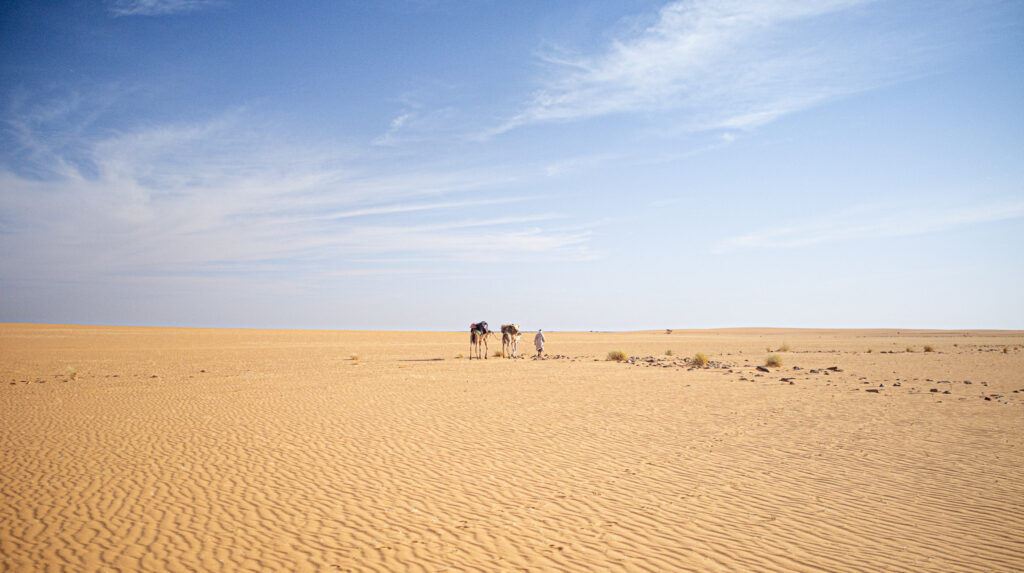 19 – 23 March 2014 ~ His voice isn’t a pretty one; it’s rough, dry, and has only a limited range before it breaks. Neither is he a particularly talented singer; he’s off-pitch much of the time (and not in the desired quarter-tones of Arab music either), and changes between high and low notes are never smooth. Still, it’s an evocative sound; full of soul, and with a sparseness that perfectly matches the desert around us. The pale pink light at the horizon announces another day; he just finished his morning prayers. Now he’s singing verses from the Quran, while making tea on the camp fire that drives away the morning chill. This morning is the same as countless desert mornings experienced by his father before him, and his grandfather before that. His name is Salima, and he’s from a centuries-old line of Moorish goat herders. Sometimes he makes some extra money guiding tourists on his camels. That’s why we’re sharing breakfast in the middle of the Sahara desert this morning.